Welcome to the Forest.

All News, Magazine & From the Forest

Dr. Roberta Villalón, author and professor of sociology and anthropology at St. John’s University, will speak on "Societies in Crisis: Inequities and Social Change."

Noted economist and author Arthur B. Laffer will present a lecture, "Taxing the Rich has Consequences".

The Arts of Leadership

Dr. Ronald A. Crutcher, University of Richmond president emeritus, will perform a cello recital followed by a conversation on leadership and Crutcher's recently published memoir, "I Had No Idea You Were Black: Navigating Race on the Road to Leadership."

Each year the University marks its founding in February 1834 by coming together to celebrate and reflect on our traditions, our history and our people. Founders Day is also a moment to affirm the University’s motto – #ProHumanitate.

This year’s program features the annual senior oration, musical performances, and a commemorative reading of excerpts from a speech made by Provost Emeritus Ed Wilson on Founders Day, 1992. @presidentwente and Provost Michele Gillespie will also provide remarks.

During this year’s ceremony, the Medallion of Merit – the highest honor bestowed by Wake Forest for service to the University – will be awarded to senior vice president and general counsel Reid Morgan (’75, JD ’79). Morgan has worked at Wake Forest for more than four decades. He has served in the administrations of four University presidents, including as General Counsel and Secretary of the Board of Trustees since 2002. He will continue to serve as secretary of the Board for the 2023-24 academic year following his planned retirement as General Counsel later this year. ...

It’s the participation trophy you actually want. The #WakeForestFund’s Fundtastic February is back! Visit go.wfu.edu/WFF or tap the link in our profile to find out more. ...

Edwin Graves Wilson (’43), known and loved widely by the Wake Forest community, was born on Feb. 1, 1923. His more than 75-year association with Wake Forest began when he enrolled as a student at age 16. He earned a bachelor’s degree in English from Wake Forest in 1943. For the next eight years, he served as a U.S. Navy officer in World War II, taught a year at Wake Forest and earned a master’s degree and doctorate in English from Harvard.

In 1951, he returned to Wake Forest and began teaching English full time – sharing his love of learning, literature and life with decades of students. Even when he accepted numerous administrative positions, including dean and first provost, a position he held from 1967-1990, Dr. Wilson always taught at least one class each semester. Following his tenure as provost, he continued to serve in University leadership for more than a decade. He was Wake Forest’s NCAA faculty representative from 1988-2003 and former president of the ACC. In 1992, a newly constructed wing of @zsrlibrary was named in his honor – commemorating his love of his students, the importance of learning and his long-standing commitment to this community.

For decades, Dr. Wilson, who regaled students by reciting refrains of the Romantic poets, has embodied all that is good about Wake Forest. He is admired for his gracious manner, kindness and deep devotion to the people and the place that captured his heart so many years ago. Today, we celebrate a century of Dr. Wilson, a man of friendliness and honor.

Elizabeth Philips  (1919 – 2008) was one of Wake Forest's first full-time female professors. Her efforts laid the groundwork for establishing the Department of Women's, Gender, and Sexuality Studies. The road between Polo Road and Carroll Weathers Drive has been named Elizabeth Phillips Way in her honor, symbolically connecting her commitment to increasing visibility and access to the Wake Forest campus.

Marge Crisp (1912 – 2005), who became Wake Forest's first female faculty member, when she joined the physical education department in 1947, was the founder of Intercollegiate Athletics for Women at Wake Forest. Crisp Lane leads from the future McPherson Road to the Haddock House, where the golf teams practice.

Biology professor Herman Eure was Wake Forest's first Black male tenure-track faculty member. He established the Office of Minority Affairs, which became @interculturalwfu, and now serves as a University Trustee. Eure Drive branches off Wake Forest Road, past the University’s science buildings where he lectured, taught and advised students and colleagues alike, and lead to Reynolda Hall, where he began his administrative career as Associate Dean of the College.

We hope you'll join us in celebrating these four Wake Forest icons, pioneers whose legacies transcend the boundaries of campus. ...

Congratulations to the 2023 ‘Building the Dream’ award winners!

One of those is the annual ‘Building the Dream’ awards. Both universities present the honor to professors, administrators or students who exemplify King’s qualities and promote diversity within their communities.

Six individuals were recognized during a joint MLK celebration luncheon.

• Demi McCoy, creative program manager with @wakediv. Rev. McCoy has worked at the intersection of theological education and community engagement at Wake Forest University since 2014. As an artist, McCoy has recorded and published numerous musical works. McCoy has established herself as a voice for marginalized individuals and in particular, Black LGBTQ women and gender non-conforming persons. She was also honored for her leadership in supporting various grassroots organizations that serve youth in Forsyth and Guilford County communities and for her work on campus.

• Gah’ques Ligons: Sophomore, Pre-med track, Winston-Salem, N.C. Ligons is a frequent volunteer in the local community. This includes a program called A Bed and A Book, which provides a child with a handmade bed and upon delivery of their bed, the child is read a story of their choosing. He is involved in many different organizations on campus including the executive board of NPHC and treasurer of @wfu_bsa.

• Janeel Black: Junior, Health and Exercise Science, Frederick, Md. Black is the President of @wfu_bsa. She also serves as the Corresponding Secretary on the executive board for Wake’s Pi Omicron Chapter of Delta Sigma Theta Sorority, Inc.

• Nick Aime: Junior, Politics and International Affairs, Fayetteville, N.C. Aime serves as the Community Service Chair for @wfu_bsa. He was honored for his commitment and community outreach.

Scenes from the Spring Involvement Fair. With 200+ clubs and organizations to choose from, there’s a niche for every student. Check out the list at wakefo.rest/clubs. 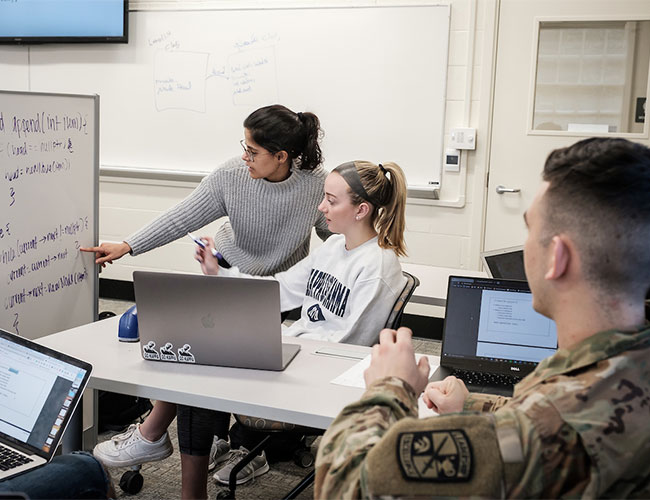 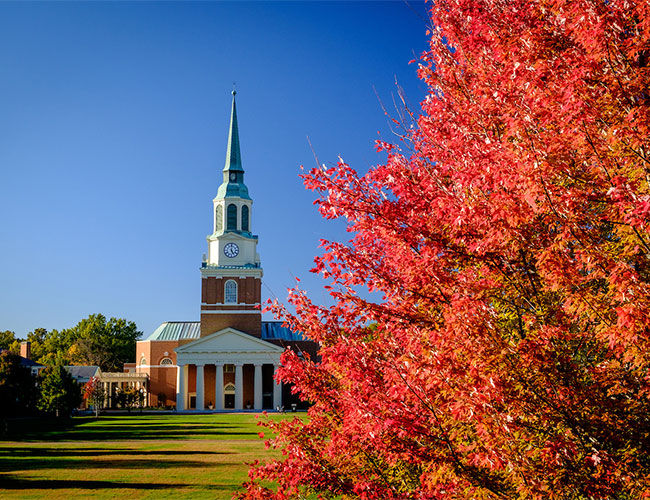 Register for a student-led tour or explore campus on your own. 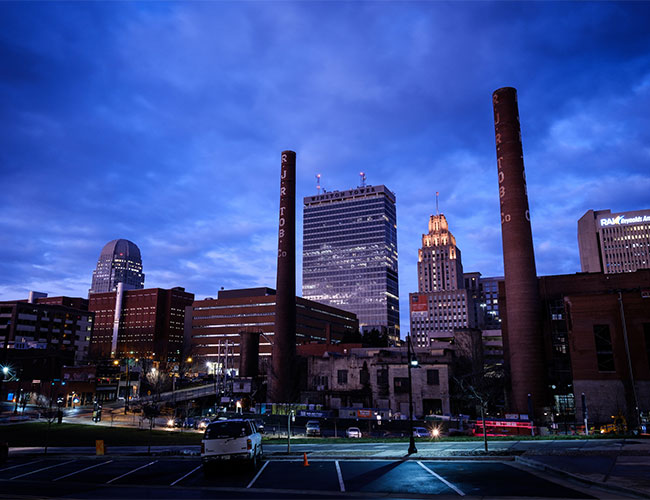 Learn more about the City of Arts and Innovation.

Whether cheering or playing, we all bleed Black and Gold